LOLBins Are No Laughing Matter: How Attackers Operate Quietly

The Uptycs Threat research team has created over 300 rules covering different techniques used by LOLBins in the MITRE ATT&CK framework.

In this post, we’ll take a look at the LOLBins used by the attackers and how you can use Uptycs EDR detection capabilities to find if these have been used in your environment.

Living off the Land binaries exploit the trusted utilities for achieving malicious objectives. They are mostly used by threat actors to stay under the radar and continue malicious activities undetected. In Windows, most of the malware families are taking leverage of LOLBins for a wide variety of phases in the attack kill chain.

Uptycs EDR has a robust coverage for all LOLBAS (Living off the Land Binaries and Scripts) techniques in the wild. Using the data from our customer telemetry and threat intelligence systems, the Uptycs Threat research team has created over 300 rules covering 8 different tactics used by LOLBins in the MITRE ATT&CK framework. The distribution of these rules with the techniques is shown below (see Figure 1). 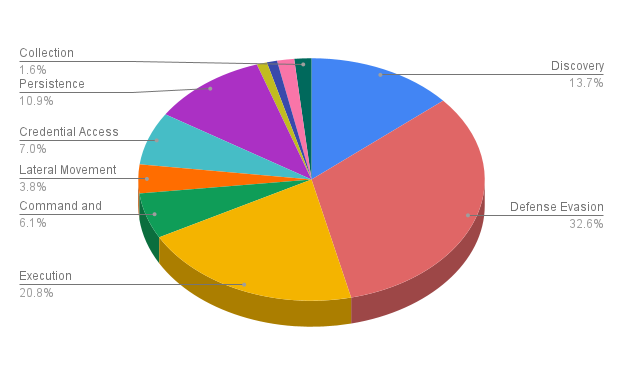 Using the data from our in-house threat intelligence systems and customer telemetry, we created a monitoring dashboard of all observed LOLBins. From April 2021 through July 2021, we have observed 26 binaries mostly used as LOLBins by several malware groups. The prevalence of the malicious binaries using the LOLBins is shown below (see Figure 2).

These LOLBins were identified to be exclusively used in the Defense Evasion and Execution phase of the MITRE ATT&CK framework. The distribution of the different ATT&CK tactics used by the attackers leveraging Windows utilities from April 2021 through July 2021 is shown below (see Figure 3). 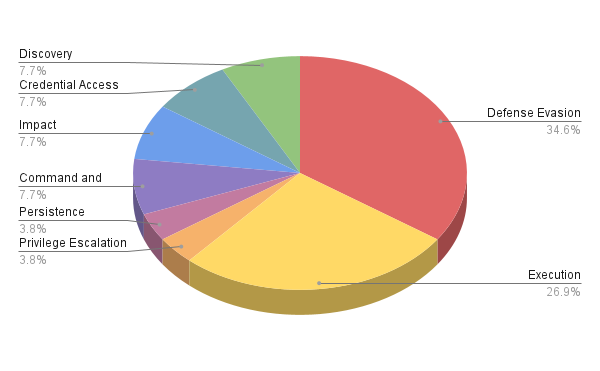 The table below describes these 26 LOLbins, along with their =MITRE ATT&CK mapping and a command line example.

Based on the data we obtained from April 2021 through July 2021, we identified the following:

We will now cover interesting examples of LOLBins and their corresponding MITRE ATT&CK tactics.

Chrome is the most commonly used browser by most users even though it is not a defaut Windows utility. During June 2021, our threat intelligence systems detected a document “Resume.docx '' which spawned a new process of chrome.exe via command line. This activity often goes unnoticed by monitoring solutions.

The document used with chrome.exe to create a new window via command line argument ‘--new-window’ to download the payload from onedrive.com as shown below (see Figure 4).

Schtasks is used to create scheduled tasks which can be executed from time to time recurrently. We identified a document using schtasks for privilege escalation.

The Excel document we identified launches schtasks via command line to run the existing task named as SilentCleanup.This action is performed to bypass UAC and execute powershell commands in elevated mode as shown below (see Figure 5).

Csc.exe is an inbuilt utility located in the Microsoft.NET\Framework\<Version> folder under the Windows directory. The main purpose of this utility is to compile C# code. As the malicious code isn't compiled, the adversaries may be able to bypass the detection and analysis as it can also be named as legitimate looking documents.

We identified a word document named “contract.docm”, which launches powershell to download the uncompiled C# code. After download is complete, csc.exe compiles the same executable code on the fly as shown below (see Figure 6).

Netsh is a command-line scripting utility that allows you to display or modify the network configuration. Netsh also has an option to add helper DLLs to extend functionality of the utility.

We identified an excel document that called wmic to create a new process of netsh to register the malicious DLL as the helper DLL as shown below (see Figure 8).

The path of the DLL is also entered into Windows Registry at HKLM\SOFTWARE\Microsoft\Netsh. This allows adversaries to maintain persistence and the execution of the DLL would take place whenever netsh is launched.

The Uptycs Threat Research team continues to see an increase in the LOLBins used in various stages of the MITRE ATT&CK framework. As most of these utilities are often used for daily activities, it becomes a challenge for traditional security solutions that do not monitor process behavior.

Credits: Thanks to our Uptycs Threat Research team member Rohit Bhagat for maintaining and making enhancements with the threat intelligence portal for identifying the latest LOLBins attacks.

To see more threat research check out the quarterly bulletin below.