Docker escape techniques allow an attacker to break out to the host system from a container. This is generally achieved by exploiting various misconfigurations in Docker. Broadly, the escape techniques fall into two categories:

Although these techniques are commonly used to escape from containers, they can also be used to evade monitoring tools that are not container-aware. Uptycs can detect both of these types of breakouts.

I/O breakout: Dropping files on the host system from the container

The I/O breakout depends on the following container misconfigurations:

An attacker will execute the following steps in the container to compromise the host system.

Second, since mirroring is complete, an attacker can drop potentially malicious files into monitored locations on the host using the following commands:

All of the activities that we did for simulation are recorded by osquery in the process_events and process_file_events tables. Please note that the osquery process runs on the host (instead of running inside each container), and therefore, it is able to record events happening on the host, as well as events happening inside any of the containers running on the same host. All these events are combined in the same tables (i.e. there are no special tables to record events from containers). However, osquery helpfully marks events coming from containerized processes and attaches basic metadata to identify the source containers.

We can use the following queries to identify I/O breakouts:

Detect mounts inside a container:

Detect I/O from a privileged container:

These queries are generic and will detect any potential malware that uses these techniques.

Entries in the process_file_events table have file metadata (opening flags, mode, inode number, filesystem type) associated with them. This information tells us whether the file was opened for reading, writing (or both), file permissions, etc.

Process breakout: Running process on the host machine from a container

The process breakout depends on the following misconfigurations:

1. Run a Docker container with SYS_ADMIN capability, and the AppArmor profile disabled:

2. Run the following commands in the container:

4. Verify that osquery generated telemetry in the process_events table and that ancestor_list contains kthread in process details.

We can use the following queries to identify I/O breakouts.

These queries are generic and will detect any potential malware that uses these techniques. 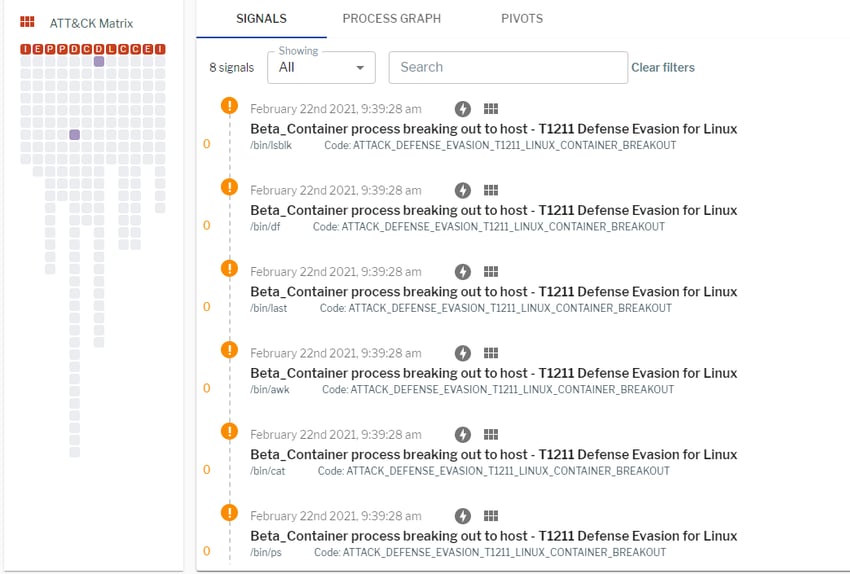 To recap, organizations are using Docker to quickly scale up and meet their needs. But accelerated adoption introduces risk because it takes time for administrators to fully understand the best ways to deploy Docker securely. This gap between adoption and security creates opportunities for attackers to exploit misconfigurations. The EDR capabilities in Uptycs address this issue by empowering security teams to detect attacks in their Docker infrastructure.

Schedule a demo to learn more about the container security functionality in Uptycs.

Adhokshaj Mishra is a security researcher at Uptycs, specializing in Linux malware research. Apart from defensive research, he also works on the offensive side in his spare time. Prior to Uptycs, he worked in security consulting (threat hunting, incident response). He loves to attend various security meetups and...