When these services were initially announced, compute resources were provisioned using EC2. With EC2, customers have to figure out the size of the virtual machine(s) and add it to the pool of compute resources available for container workloads. EC2 instances are either provisioned on-demand or reserved instances are used, and customers have to worry about patching, security, etc.

In 2017, AWS released a feature called Fargate. Fargate under the hood uses EC2 virtual machines or bare metal and AWS manages the lifecycle of the virtual machines. So customers are not on the hook to patch and secure the compute resources. Initially, the cost of Fargate made it less palatable, but AWS subsequently reduced the prices significantly and customers now use Fargate with ECS or EKS.

Containers running inside Fargate can be configured to send log data to popular log aggregation tools. Some compute, memory, network, and telemetry information is also made available to customers.

Customers don’t have to worry about maintaining virtual machines, but they’re still on the hook for creating secure applications and properly packaging containers. Many of Uptycs’ customers are interested in details like:

If the application running in the container is compromised, an attacker can access databases or other resources the application has access to. With Fargate, the surface area of attack has been reduced as customers are not on the hook to secure virtual machines or bare metal. But container security is still something customers have to address.

For ECS or EKS with EC2, customers run k8sosquery as a DaemonSet. Osquery tables can be used to gather information from the EC2 VM and also from the containers running on it. Customers also get process, file, socket, and other events in near real-time using either Linux auditd or eBPF. Fargate unfortunately does not provide osquery any means to gather details from the host.

The recent version (1.4) of Fargate added support for ptrace. This allows applications running inside the container to use process tracing to get process events. Osquery supported inotify for a while and this can be used to track file events inside the container. Using Uptycs’ AWS integration, AWS Flow Logs can be used to track network activity. To get events and other security insights, osquery needs to be running inside every Fargate container.

Ideally, osquery does not need to be packaged in every container. But Fargate is an exception to this. Below we document two approaches for packaging osquery in application containers. The focus of this post is on ECS with Fargate. We’ll talk about EKS with Fargate in a separate post.

There are a few manual one-time actions that need to be performed.

Log in to your Uptycs platform and in the software downloads section, select “Download flags + secret.” You will not need the flags, but the secret must be provisioned into your AWS account. 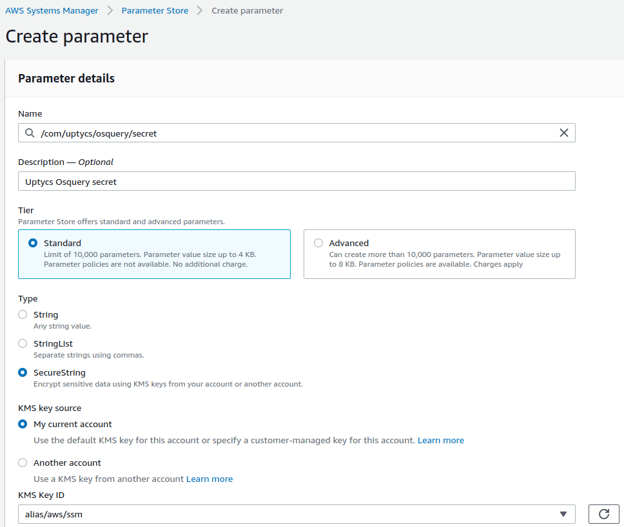 If you already use ECS Task Role (not Task Execution Role), it should be updated to allow osquery to read the Uptycs secret. If not, an IAM role should be created for ECS tasks. A policy like the following can be attached to the existing or new task role to retrieve the Uptycs secret from the Parameter Store.

Figure 3. A sample policy that can be attached to a task role to retrieve the Uptycs secret. (Click to see larger version.)

In this approach, osquery is packaged into every ECS task container when the containers are built. This requires changing the Dockerfile. For example, if the Dockerfile to deploy NGINX looks like the following: 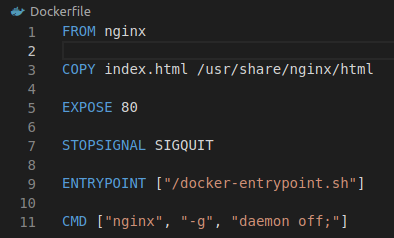 It should be modified as follows:

When creating the task definition:

Figure 7. UPTYCS_HOSTNAME and UPTYCS_SECRET being added to the task definition. (Click to see larger version.)

Finally, when creating the service:

This approach does not require modifying the Dockerfile, but every task definition needs to be modified as described here.

You should modify entryPoint, linuxParameters, environment, and volumesFrom for all existing containers in containerDefinitions as follows: 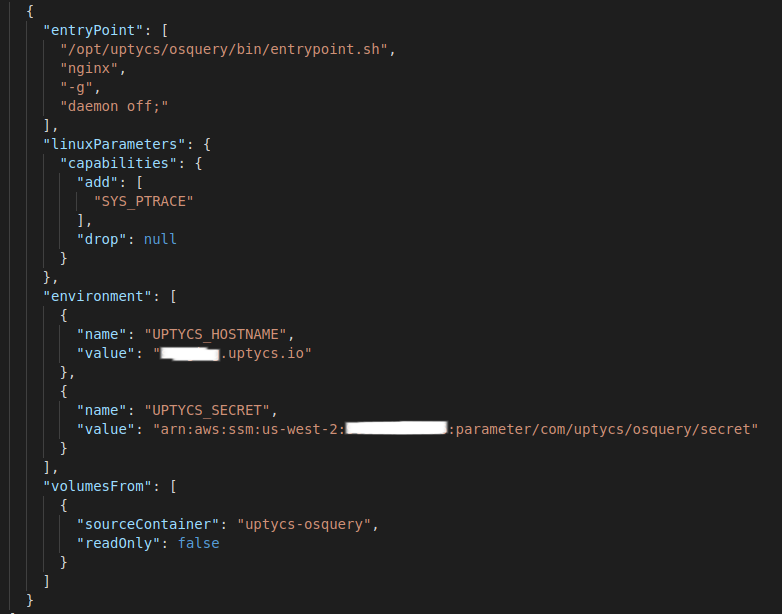 To add SYS_PTRACE capability, linuxParameter should be used. This lets osquery capture process events inside the container.

UPTYCS_HOME and UPTYCS_SECRET should be passed to the container as environment key values.

In addition to updating task definitions, the service should be updated to use 1.4.0 as the Fargate Platform Version. LATEST, which is 1.3.0, does not support the PTRACE capability.

Once the ECS Fargate task is RUNNING, each task will show up as an asset in Uptycs: 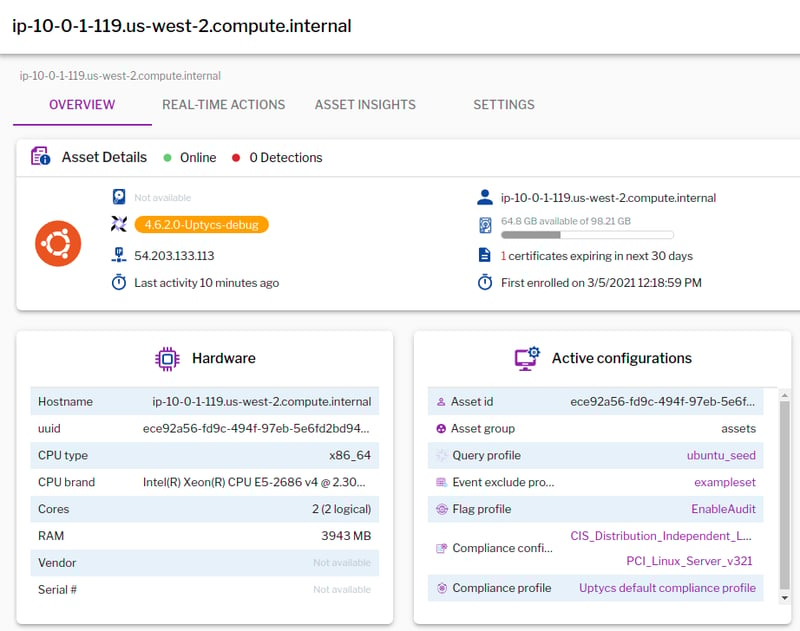 Figure 10. Once the ECS Fargate task is active, each task will show up as an asset in Uptycs. (Click to see larger version.)

We recently added two new tables, ecs_metadata and ecs_task, that capture the ECS metadata and task information for each container:

A flag profile that enables inotify (allow_inotify_file_events) and process events (audit_allow_process_events) can be created and assigned to Fargate containers to capture process and FIM activity.

Schedule a demo to learn more about the container security functionality in Uptycs.