This blog post details the operation of the latest WarzoneRAT sample and also covers the advanced detection capabilities of the Uptycs EDR in detecting techniques like Process Hollowing and UAC Bypass.

WarzoneRAT is a Remote Admin Tool that has a wide range of capabilities including keylogging, remote desktop, and webcam capture, live and offline keylogger. This malware is distributed through malware-as-a-service (MaaS) and is also used as a staged payload in the attack kill chain by threat actors in APT attacks.

The Uptycs Threat Research Team contributed to the profile of WarzoneRAT (S0670) in the MITRE ATT&CK framework, detailing the techniques and functionality of the malware.

A depiction of the kill chain used by WarzoneRAT in one of the recently captured samples in our in-house osquery integrated threat intelligence sandbox is shown below (Figure 1). 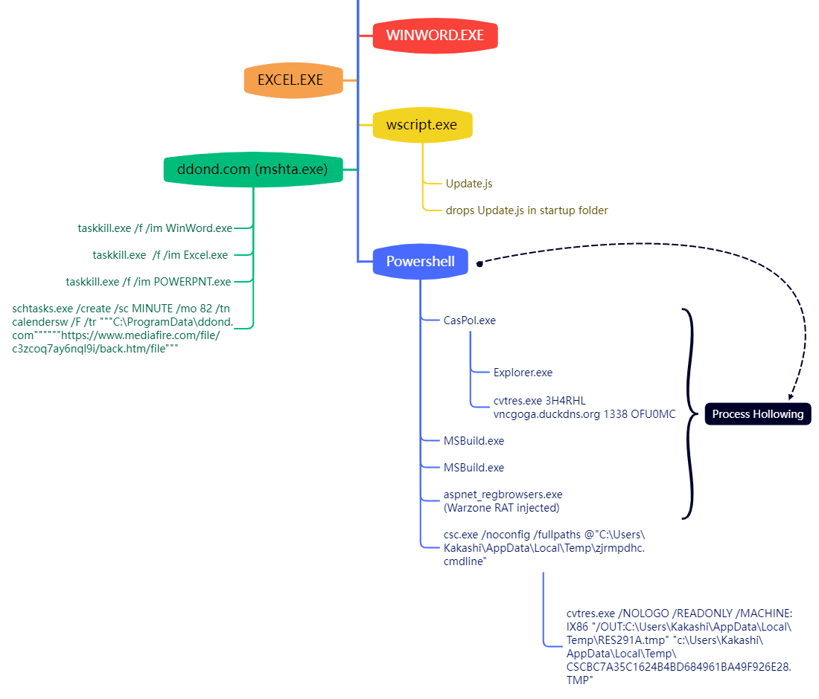 The embedded macro inside the document (907012a9e2eff4291cd1162a0f2ac726f93bad0ef57e326d5767489e89bc0b0a) executed multiple set of commands to download a powershell script that loads the malicious executables using [Reflection.Assembly]::load cmdlet as shown in figure 3: The API usage for the process hollowing is shown below (See Figure 4). Additionally, Uptycs EDR contextual detection provides additional details about the detected malware. Users can navigate to the toolkit data section in the detection alert and click on the name to find out the behavior as shown as below (See Figure 6)

This blog detailed the new WarzoneRAT operation on a victim's machine. We shed light on the new Process Hollowing technique used to evade process-based defenses. This makes it necessary to have a security solution that has advanced analytics and provides granular visibility of targeted attacks and their kill chain. Uptycs’ EDR with advanced detection capabilities, correlation, and YARA process scanning capabilities successfully identified the malicious behavior and detected WarzoneRAT.

DirtyPipe Linux Exploit: How It Works And How To Respond

Destructive Wipers: What You Need To Know