Often, in the information security community, we bandy about terms like “defence in depth” or “layered defences.”  Most of the time, it’s just a platitude for “buy more stuff.” It’s worth exploring the way these terms evolved, and how we should think about defensive architectures in the world defined not by physical space, but by network connectivity.

“Our goal should be to create defence in height, where we know how our defences work together towards defeating adversaries.”

In the flat space of military defences in the pre-WWII area, defence in depth would refer to one of two concepts.  In the first mode, it was a set of defences which interlocked in some form -- consider a castle wall, a moat, and a set of guards atop the wall.  Each of these defenses, individually, was trivially defeatable, but together, they multiplied. While an adversary was busy crossing the moat, they were easy to shoot at.  The moat made it hard to scale the wall. The wall gave defensive cover to the guards. In the second mode, it was about depth in distance - consider the depth of the Soviet terrain as they fell back in World War II, and the lengthening of the attacker’s supply lines as weather set in.  “Never get involved in a land war in Asia” is good advice for a reason.

Integrating defences relies on some basic features of the physical world.  Adversaries occupy space across a period of time. Defenders can trivially observe adversaries - the Mark One eyeball is generally ubiquitous across history.  But when defences integrate, it may be easier to think of them as stacking – defence in height.

When defences fail to integrate, allowing an attacker to sequentially defeat them – consider a set of hurdles in a line – then depth may be the correct way to consider the dimension.  Consider a pair of identical, locked doors, 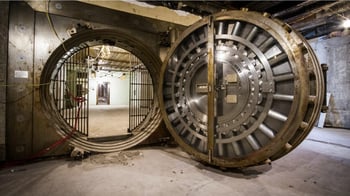 with a small, unmonitored space between them.  While an attacker may take more time to defeat the doors (either using lockpicks, slides, or a purloined key), neither defence is actually made harder by the presence of the other.

Sometimes, defences don’t even stack.  Defence in breadth represents a set of defences that present a choice to an adversary, where they can opt not to engage in a defence, by going around it.  The postern gate provides an alternate path for a spy than the front gate; the Maginot Line could be gone around; any of a dozen servers in a network DMZ can be breached to provide access to an intranet.

The lesson for defenders is to understand both the system you’re defending, and how its defences work – or don’t ­– together.  Increased complexity may be an indicator of defences in breadth, often with “layered” defences where the defeat of one could go undetected.  Our goal should be to create defence in height, where we know how our defences work together towards defeating adversaries.

How do we approach improving our defences?

All of these approaches have value in improving our defenses, and restoring height to our walls in meaningful and helpful ways.

This article was originally posted here on www.csoandy.com