Attackers don’t think in silos, and security tooling should defend across the increasingly interdependent mesh of our infrastructure. Today at KubeCon + CloudNativeCon North America, Uptycs is announcing enhanced threat detection and hardening capabilities for Kubernetes and container deployments.The offering unifies monitoring and threat detection across the control plane (Kubernetes, including managed services) and data plane (running nodes and containers) of your environment so that your analysts have more context when triaging and investigating alerts. These enhancements also stretch back deeper into the CI/CD pipeline with registry scanning, secrets scanning during the build and deploy stages, and NSA/CISA Kubernetes hardening checks for drift detection.

These capabilities are a natural enhancement to our unified CNAPP and XDR solution, and are available as part of our Uptycs Secure module.

Catch Them Red-Handed: Detections for the Kubernetes Control Plane

Real-time, normalized data is the foundation for detections across diverse asset fleets and scaling infrastructure. K8s and container detections are mapped to MITRE ATT&CK tactics and techniques of attacker behaviors, with Uptycs tracking both K8s audit logs and container process events to identify malicious behavior. The control and data plane have a special relationship that adds important context for analysts when trying to determine if an alert is legitimate and what the severity of the incident is.

Uptycs normalizes telemetry in real-time, meaning data from the control plane and data plane is ready to be correlated and easily JOINed immediately. This makes getting visibility into your assets much more accessible, and gives the strong foundation needed to build high-powered detections as outlined below through two examples.

Issue: Attackers run 'exec' commands to execute malicious code and compromise resources within a cluster. This can lead to remote code execution or lateral movement.

Detection with Uptycs: Uptycs continuously monitors K8s runtime activities to detect malicious activities that try to execute commands within containers. For this detection, Uptycs detects the source IP address for the request_uri as an external request looking to pod exec into the container.

Security Enhancements From Build Through Runtime

Keep runtime assets secured and configured with recent Kubernetes hardening guidance from the U.S. National Security Agency and Cybersecurity and Infrastructure Security Agency. These checks provide clear answers to how you should harden a given K8s cluster or configure your pods. 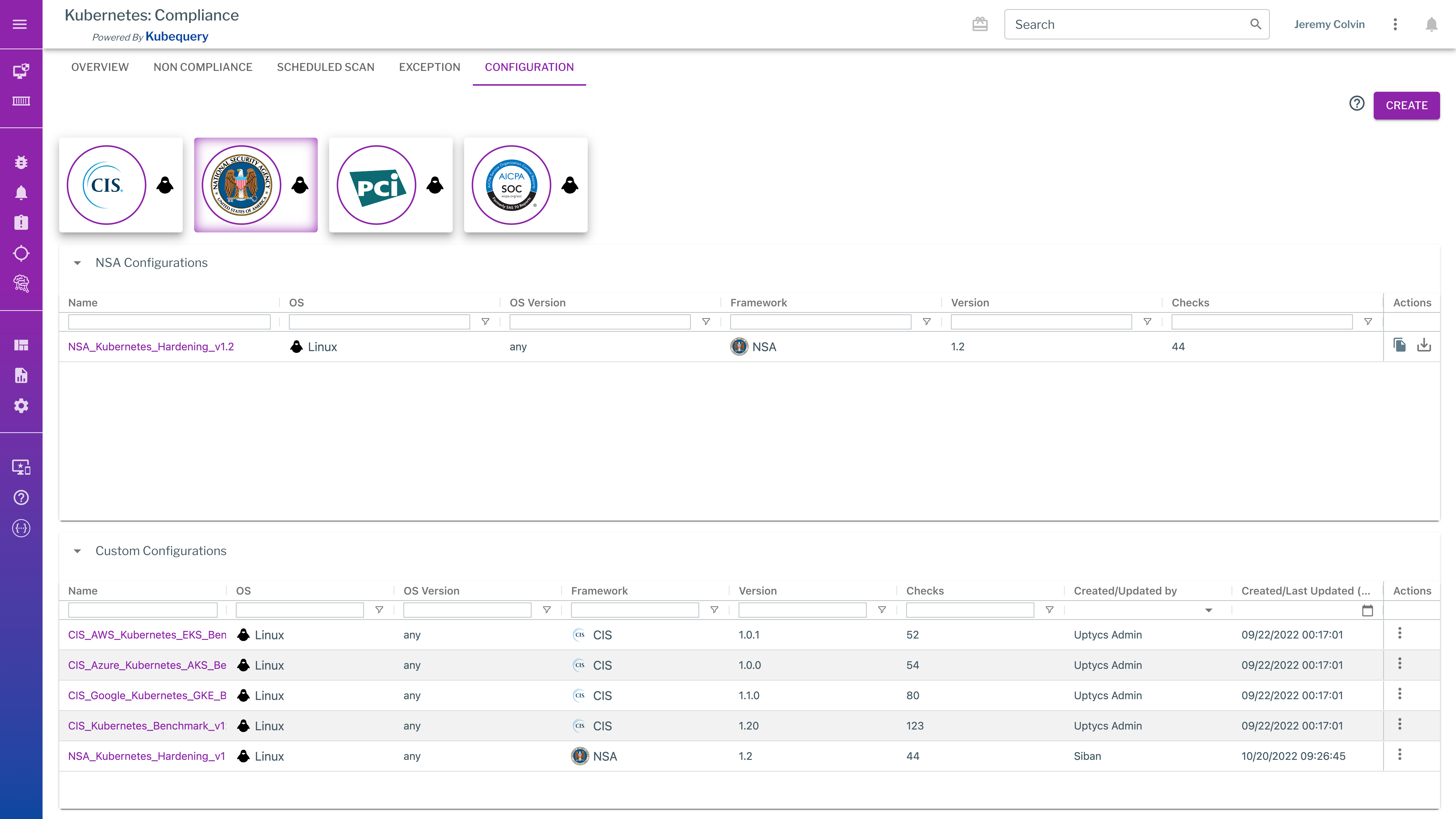 Rich process and socket event data are core to detections at the data plane that track what commands attackers ran in a container, what process events that command spawned, or even what data was actually touched. This data can be correlated back to the control plane to comprehensively track attackers and protect across both the control plane and data plane.

This detection from the data plane captures a kubectl trying to access K8s secrets. The process graph walks through the process events captured from the linux container during detection of the “kubectl get secrets” command.

Interested in learning more about these enhancements and our Kubernetes security solution? Uptycs will be at booth #G29 at KubeCon + CloudNativeCon. Stop by! We will have a virtual booth as well if you won’t be attending in-person.

In November, Sudarsan Kannan (Director of Product Management) joins us on Uptycs Live for a special webinar diving deep into the challenges around building threat detections for Kubernetes, what makes these threat detections so powerful at the control plane and data plane, and the importance of implementing security controls in the build cycle. Register for the November webinar “Hunting Detections from the Control Plane and Data Plane: Hardening Kubernetes and Container Security” here.

Jeremy Colvin is a Technical Product Marketing Analyst at Uptycs and enjoys learning the bits and bytes of what makes good security. Prior to Uptycs, Jeremy spent two years at Deloitte helping clients architect, configure, and implement secure systems. He graduated from Princeton with an AB in Public and International...